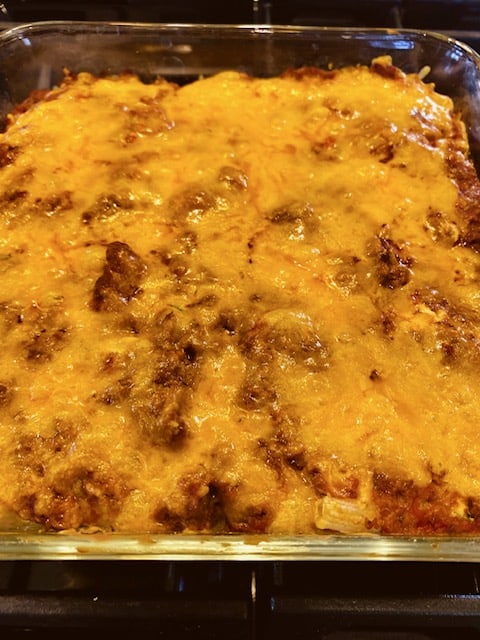 When I was a kid my parents belonged to a “couples group”. The group consisted of about 8 couples who each had a lot of kids. We spent many weekends and summer vacations with these families doing things like camping trips, taco feeds, pool parties, church events, hoot-nannies (playing guitars and singing around a fire-pit) etc. The parents also played a lot of pranks on each other like leaving a “golden commode” (gold spray painted toilet) at each other’s homes in crazy places. This all took place in the late 1960’s and early 1970’s.

I have memories of the many casseroles that the were made to serve the large crowd of kids and adults. One such casserole was named Alice’s Heavenly Hamburger, after its creator and one of the Moms, Alice MaCaller. Here it is 50+ years later and I’m sharing that recipe with you. I’ve renamed it because mine is a vegan version. But you have permission to call it by its original name!

This four layer pasta bake is nothing short of delicious! When you’re in need of some good old-fashioned comfort food this casserole, Alices Heavenly Veggie-burger, fits the bill!

My version uses Impossible Burger, Kite Hill Vegan Sour Cream and Vio-life Vegan Cheddar Cheese with gluten- free elbow pasta (I prefer rice based pasta). I swear it tastes so much like the original that if I were to serve it to my siblings they would not know the difference!

The original recipe has been cut in half. Make a double recipe for a family size (or for a-mazing left-overs).

Did you make this recipe?

Did you make this recipe?

All recipes are gluten-free, dairy-free, processed sugar-free and vegetarian or vegan